One October Weekend, all this happened… 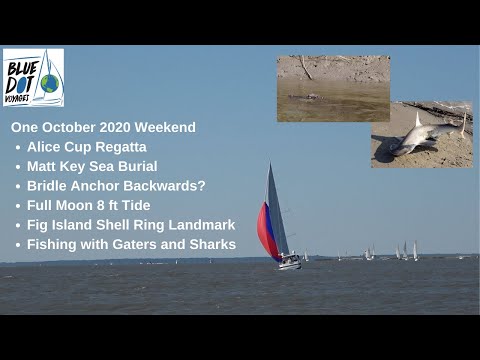 We were headed out to see a funeral on the water, when to our surprise and delight,  we ran headlong into the Alice Cup Regatta by the Charleston Ocean Racing Association.  This is the first regatta I have seen live and I think I’ve caught the fever!  What a beautiful sight to see all of these colorful sails on the river.  The race had 2 legs – Charleston to Rockville – 32.35 NM, with an awards party at Bohicket Marina that night and back again the next day 31.7n NM.   More info here if you are interested for next year.

We attended a Funeral on the Water on Saturday, October 17, to pay our respects to Offshore Sport Fishing Captain Matthew Inman Key, a long time friend of Stephen’s, who fished tournaments together back in the mid 1980’s.

We joined the boat procession, watched the cremated remains distributed on the river and were able to video a good portion of it for the family.  Matt was only 51.  Obituary here.

Stephen loves to fish on Privateer Creek right behind Horse Island,  and St. Christoper’s Camp and Conference Center.  There is also an alligator that shares this spot – even though it’s salt water,  he must think the fishing is worth it.  We scored a redfish, which became lunch.  We kept our distance and he kept his.

Shark on the Beach

Went Fishing for dinner on Seabrook Island Beach,  but all Stephen caught was a small Bonnet Head shark. It’s a little un-nerving to know that sharks swim that close to the beach,  but in all the years swimming there, we’ve never been bitten.

Usually the tide averages 6 ft but during the full moon of October, it turned into a 7.7 ft tide.  That’s almost 2 ft more water.  Imagine what that means in terms of actual volume  AND what that extra volume means for the current speed.  We love to sail during full moons, but this adds an extra little adventure into the trip.

This site includes one of the largest and most complex shell rings in North America, dated between 4400 years ago and 3600 years ago, and is one of the best preserved circular shell rings.  It consists of both shells and fish bones.  While not evident to our untrained eye,  this place just felt important.  And it seemed like quite the party spot for the locals… Aside from the shotgun shells, mosquitos and gnats, it was a worthwhile exploration.  It is located off Ocello Creek on the Edisto Island side of N. Edisto River.  If you go,  be sure to check out the Oyster farming floats and cages.  More here.

Ever have your Anchor end up on the wrong side of the bridle ?  Well, we did.  Now usually Stephen is at the helm and I am doing the anchor pulling,  but we decided this trip to reverse roles so that we could get equally good at both.  So, this happened on Stephen’s anchor pulling watch:-).  We could NOT get the anchor up at all,  because the chain was rubbing on the bridle lines.  Things were a little tense to say the least, as we thought we were dragging anchor as well and did not want to end up in the marsh.  The only fix was for me to hold the boat steady while Stephen got the dinghy down,  got under the anchor, and then worked it back around where it was supposed to be.  This is so hard to even explain.  So, Once at the dock,  we tried to re-enact how in the world this could have happened.  Watch the video and please if you have had a similar situation occur,  let us know.

PILAR got a full polish and wax recently.  We had the hull done in June,  and finally found someone to do the rest of the boat at Bohicket.  Looks like a new boat!  Thanks Tommy at Copeland Marine and Erich at Charleston Yacht.