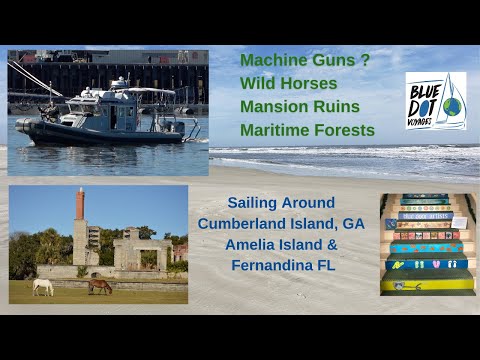 We spent Christmas/New Year’s week sailing around Cumberland Island, Georgia and Amelia Island and Fernandina, Florida. Plenty of excitement and beauty to behold – even in the midst of covid.

12/28 – Today we sailed down from St. Simons Island to the south end of Cumberland Island. With no wind in the forecast, we decided to cruise down the ICW, something that we don’t do very often. It was a beautiful stretch of marsh river, but as always pay attention to marked shallow areas on your charts. We passed two boats stuck in the sand on our short 4 hr. trip.

We passed the St. Mary’s nuclear submarine base, a 16,000 acre base with 5 subs carrying ballistic missiles with over 20 warheads each – with a little unnerving machine gun pointed at us as we passed an anchored sub.

We anchored in East River right across from the Ice House, aptly called that because it was the literal ice house for the Carnegies when they lived on the island. Dinghy parking available on first come first serve basis. We visited the old Carnegie mansion that afternoon. Cumberland is the largest of Georgia’s Sea Island. Cumberland Island National Seashore became official in 1972 when it was donated by the Carnegies.

Wild horses roam the island freely, descendants of horses left behind by early settlers. The Dungeness Castle Ruins, which was destroyed by fire in 1959 is the main attraction.

A remnant of the gilded era, it consists of the main castle, the Gardners’ tabby house, the recreational facility, cemetery, gardens and grounds. Carnegie also built several other mansions for his children, one called Greyfield – now an expensive hotel, and Plum Orchard, which is open for tours. Both more towards the north side of the island, you will need bikes or take a bus tour. There is also a “settlement” on the northern end by former slaves in the early 1890s. This contains the First African Baptist Church where JFK Jr. got married. 50 miles of hiking trails criss cross the island. Camping is also available.

We walked to the Dungeness Ruins, then to Dungeness Beach, and north to the Trail back to the Ice House Dock, which is a 7 mile hike that took about 3 hours.

12/29 – Today, we sailed to Amelia Island, where we docked at Fernandina Harbor, then visited Fort Clinch State Park for the afternoon. We enjoyed dinner at the Marina restaurant, a local hangout specializing in Grouper prepared dozens of different ways!

12/30 – After a morning browsing the Fernandina shops, we returned to Cumberland for a relaxing night on anchor again. We collected oysters and enjoyed for appetizers.

12/31 – Today, we biked from the SeaCamp to the Stafford Beach and back. It was a scenically beautiful and peaceful ride. Biking the northern portion of the island is about 14 miles, but we decided to only tackle 10! Tip: Arrive early at Sea Camp if you hope to rent some of the park’s bikes. Get in line before the ferry arrives so you have first dibs.

1/1 – Sailed back to St Simons today, did a little boat maintenance upon arrival. Stephen and I spent the afternoon fishing down by the church.

1/2 – Pauline and Bill returned home today. Stephen and I washed the boat, did general maintenance and cleaning and prepped for our early departure the next morning. We visited St. Simon’s Goulds Inlet and the local drive through liquor store.