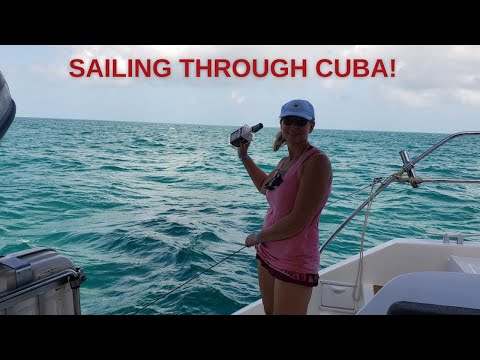 We sailed first from Marco Island, FL to Dry Tortugas, FL   (see part one).  Then we sailed  around the western end of Cuba to Grand Cayman, experiencing extremely rough sailing in Caribbean seas for the entire 8 days during our Christmas-New Year's break.  While not a vacation in the restful traditional sense,  this sail was full of adventure and challenges that gave us confidence and experience to continue our catamaran sailing voyages.

We left Dry Tortugas around 9 AM and began our sail southwest to round the western tip of Cuba.  Heavy seas for most of the day at 5-7 ft,  avg speed 7 knots.  Most difficult part was crossing the gulf stream at 24 degrees latitude.  Heavy current slowed us down.  Fished all day, lost a teaser Stephen had for 30 years, lost a big catch (not sure what) – enough to catch a blue marlin around 6 pm !  We fought the fish for 1 hr 15 minutes, and finally caught sight of him gleaming in the water.  Bill and Stephen brought him up enough to get a good picture, down on the sugar scoop.  Who says you can’t catch deep sea fish on a sailing catamaran?  Caught and released. Estimated at 400 pounds.

Friday night winds slowed down, so Stephen adjusted course and had to tack in order to keep those engines off.  We still averaged 7 knots so we were grateful for our captain’s skills in trimming those sails.  Sailed all night.

Crossed the Gulf Stream at 24 degrees latitude.  Sailed all day, very slow 4.5 knots. Took the opportunity to fly the Jolly Roger Parasail while the Cuban dolphins escorted the Pilar.  We finally started those engines late afternoon.  Early evening winds picked up all of a sudden, and flew around the corner of Cuba, Cabo San Antonio about 9 PM.   Continued to Fat Maria ( Maria La Gorda) , fast – 8 knots.  We should have stopped for the night there, because once around Fat Maria, the conditions changed drastically.  We were now sailing the Caribbean Sea.

Past Fat Maria, we encountered the trifecta of 25 knot headwinds, strong heading currents, and 12 ft sea swells with 6-10 ft wind waves.  We barely could make 2 knots with engines.    We pressed on for the morning, thinking that it had to improve.  But it did not.

So, we started tacking back and forth to get in the lee of land, but even close to shore, we saw 12 foot waves crashing on the cliffs of southern Cuba.  We could make no headway, staying 12 miles offshore as recommended by USCG.  With no other options, and nightfall coming soon, we headed for the bay on the other side of the escarpment (sea wall).  We did not know for sure if it would be better, but we all hoped and prayed that it would.  We even had to tack a couple of times to get in there.  We finally found an acceptable spot to anchor in the bay at Cobo Francis around 10 PM.  We rolled all night,  but so grateful to be out of those heavy seas.  We all slept much better, anticipating a planned daybreak departure.

Thankfully, Monday’s voyage was the most pleasurable day we have had yet on this trip, although we were still sailing in the Caribbean Sea.  We left our anchorage in Cobo Francis, in Golfo de Batobano.  Our destination was as yet undecided as we did not trust that our GRIB weather forecasts were going to be accurate given local sea conditions.  We motor sailed off and on much of the day with the wind 30 degrees off our bow.   Averaged 6 knots.  Sunny all day.   25 knot winds.  We sailed between the Isle of Youth (Isla de la Juventud) and mangrove cays.

Isle of Youth used to be called Treasure Island - yes - you guessed it - the location setting for the book by Robert Louis Stevenson,  as well as Peter Pan!  A little interesting history from Wikipedia - Following its defeat in the Spanish–American War and the Cuban War of Independence, Spain dropped all claims to Cuba under the terms of the 1898 Treaty of Paris. The Platt Amendment of 1901, which defined Cuba's boundaries for the purposes of U.S. authorities, left the U.S. position on sovereignty over Isla de la Juventud undetermined. This led to competing claims to the island by the United States and Cuba. In 1907, the U.S. Supreme Court decided, in Pearcy v. Stranahan, that control of the island was a political decision, not a judicial one. In 1916, a pamphlet titled Isle of Pines: American or What? called for the U.S. to annex or purchase the island to settle the issue.

In 1904, Cuba and the United States negotiated and signed the Hay-Quesada Treaty, which recognized Cuba's sovereignty over the island. The U.S. Senate ratified this agreement on March 13, 1925, over the objections of some four hundred United States citizens and companies, who owned or controlled about 95% of the island's land.

Much of the island is covered in pine forests, which is the source of the island's large lumber industry (as well as its original name - Isle of Pines). The northern region of the island has low ridges from which marble is quarried, while the southern region is an elevated plain. Agriculture and fishing are the island's main industries, with citrus fruit and vegetables being grown. A black sand beach was formed by volcanic activity.  There is a prison on the island,  although now it is used for a museum.

The island has a mild climate but is known for frequent hurricanes. It is a popular tourist destination, with many beaches and resorts, including Bibijagua Beach. Until the Cuban government expropriated all foreign-owned property in the early 1960s, much land was owned by Americans, and the island contained a branch of the Hilton Hotels chain.

Although we would have loved to stop,  time schedules demanded we continue on.  We crossed the prettiest fluorescent green seas you could imagine rivaling the Bahamas.  With all looking good, we decided to head to the Canal de la Cruz, where we would anchor for the night and leave early the next morning for our final destination Grand Cayman.  On the way, we enjoyed a sunset over the mountainous islands.  We celebrated New Year’s Eve with Hispanic Food (of course) and toasted our anchorage arrival with Champagne.

We left our anchorage at daybreak.  We motored through the skinniest channel at Canal de la Cruz, (we named it affectionally "mangrove pass" with mangrove sticks as cans and sandbar markers.  Took us an hour to navigate 1 mile, seeing 2 ft of water and stirring up the sand at one point.  Stephen and Bill did a great job in the channel.  We then motor sailed east in the Bay towards our exit point, averaging 6 knots.  The wind shifted at one point, even allowing us to cut off a few miles from our trip!

In the channel, Canal del Rosario, we saw 4 other catamarans.  Dream Carolina – a 66 ft with 33’ beam, Jamaica – a 59 ft with a 26’ beam, and 2 others not on AIS.  They were anchored in the protected area enjoying the sun and the water.  On each side of the canal were waves breaking over the reefs.  Beautiful, but indicative of things to come.  We left Cuba at 3:30PM.

On the ocean side of the channel, 6-8-foot breaking waves on our port forward side, with some larger swells.  While not ideal, it was so much better than headwinds we had deal with for so much of our trip.  20 knot ESE winds allowed us to finally sail without motor and still make 7-8 knots.  We all left a message in a bottle for Cuba as we left.  A calendar page for January 2019, with notes from us to the Cuban people.

Forecast called for wave reduction to 5-6 ft by Wednesday.  If all went well and we maintained speed, we would arrive Grand Cayman Wednesday evening.

Rough night.  No reduction in wave size, in fact at one point, it seemed like they increased.  Our course was set for the smoothest ride possible to protect our boat and let us sleep without sacrificing time or route direction.  Winds held steady and even gusted to 25 knots.  We did have a beam reach which gave us 9-10 knots of speed so we made great time with only sails, as our engines got a well deserved rest.

Morning dawned and we were all looking forward to landing in Cayman later that afternoon.  We did have to take one tack back up to the northeast, so we could then sail straight down to Cayman.  We arrived in Grand Cayman customs port around 5:30 and requested special after hours clearance which they were happy to accommodate for an extra fee.  We were out in a half hour and a pilot showed us to our mooring ball for the night in Georgetown Harbor.

We dined at The Lobster Pot that evening – without reservations, they squeezed us in.  Wonderful food and service for four very hungry, very tired sailors.   Such kind people everywhere we went.  We all slept well that evening.

It's My Birthday! - January 3, Thursday

Birthday for Dawn today!  We started the morning snorkeling at Eden Rock/ Devil’s Grotto, then motor sailed down along 7 Mile Beach.  Seeing more boats anchored in the calm green waters, and by special birthday request, we stopped for another snorkel – sting rays, all kinds of tropical fish and cool refreshing water.

We finally pulled into our dock at Cayman Island Yacht Club around 1 PM, lunched at their on-site restaurant, Gordons Seafood, and returned to wash our boat, now caked with salt from 7 straight days on the water.  That evening, Stephen and I found a wonderful sushi place – Yoshi Sushi – and celebrated my birthday eating our favorite food with some lemon drop shots!

Boat Maintenance Day, followed by learning how to use the new Mavick Pro Platinum drone that Stephen had given me for Christmas.  Last day on the boat and what happens – I sprained my ankles.  Hard to imagine after all the rough days on the water, my injury occurs while at dock.  Last dinner on our boat that evening, with a night dinghy ride for desserts at Gordons Seafood Restaurant.

Back to Work - January 5

Head for the airport to take our flight home.  SO hard to leave the boat there and return to winter.  Some day, we pray we can just stay on the boat!

BTW, we needed to get special permission from Customs to leave our boat there longer than 30 days – in case you ever decide to sail there, keep this in mind.

People always ask what we eat on the boat.  Well,  food.  Here's a sample menu.  It's pretty normal stuff.