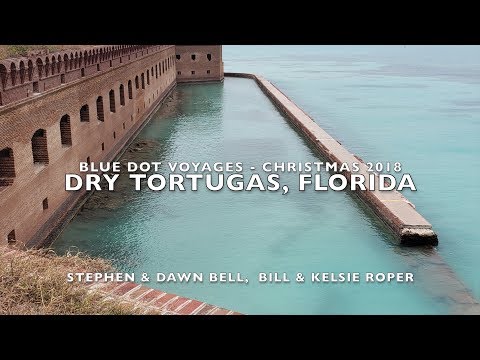 Sailing to Dry Tortugas in West Florida was the first leg of our voyage to Grand Cayman.  Our route:  Marco Island FL to Dry Tortugas FL, in the Gulf of Mexico, a short 24 hours.

Our Christmas voyage began on December 23, 2018.  We left Charlotte at 530 PM, arrived Fort Myers, dined at PF Changs and made a final shopping stop at Best Buy to pick up a microwave for the boat.  Then off to Calusa Marina in Goodland FL and sweet sleep.

A note on the microwave:   After much deliberation on what appliance to buy for heating Stephen’s half & half in the morning for coffee (one luxury we are not giving up), it turns out the microwave had the lowest wattage (700W) draw on the electric.  Amazingly, most coffee pots, water kettles and other appliances draw at least 1000W, which was stressing out our electrical systems in the galley.  So, the GE microwave won.

With much to do to prepare for our trip, we quickly went through our checklist - the Must Dos first.

But Christmas Eve comes once a year, so we celebrated with a boat dinner and a Christmas movie – Scrooge, followed by a walk around the marina to see the boats that had been lighted for the holiday.

More boat work, and a Christmas fishing expedition, more Christmas movies, and our final farewell phone calls to our kids and family.

Our fellow voyagers arrive – Bill Roper and his college age daughter Kelsie.  Bill would be a great help sailing the Pilar, having grew up in Florida spending a lot of time on boats, as well as having his captains license himself.  His boating history was mainly power boats,  so the slow pace of the trip would prove taxing. Kelsie had been on Girl Scout sailing adventures, so had experience we could use as well.

We finish last minute item pickups, including a must do stop at Kirk’s Fish to pick up some fresh stone crab claws and key lime pie.  We leave the dock at 3 pm to catch the high tide out the shallow channel.

We sailed overnight – 90 miles, averaged 8 knots on 15 knot avg winds and arrived Dry Tortugas at 9 AM Thursday.  Only one trouble spot – when the furling line on our genoa was not working correctly, the genoa flapped around and the sheets hit the helm station isinglass so hard that it shattered a hole in the front windshield.  Something always breaks on our trips,  But, overall, a great start to our journey.

Dry Tortugas National Park lies 70 miles west of Key West, FL.  It is a cluster of 7 islands, and is noted for bird and marine life, as well as shipwrecks.  We toured Fort Jefferson, a very large 1800s masonry fort in the morning, walked the beach in the afternoon.  Water was a bit cold for snorkeling much to our disappointment.   We watched seaplanes land and take off right next to our boat!

A little history from the National Park Service.

The Fort was first named Las Tortugas (The Turtles) in 1513, by Spanish explorer Ponce de Leon.  The name Dry Tortugas came about to inform sailors there was no fresh water.  In 1825, a lighthouse was built on Garden Key to warn sailors of the coral shoals.  Another light was built in 1857 on Loggerhead Key.

In 1829, the US decided to control navigation to the Gulf of Mexico and protect Atlantic-bound Mississippi River trade by fortifying the Tortugas. Fort Jefferson’s construction began on Garden Key in 1846 and went on for 30 years but was never finished.  During the Civil War, the fort served as a Union military prison for captured deserters.  It also held four men convicted of complicity in President Abraham Lincoln’s assassination in 1865. The most infamous was Dr. Mudd, who later went to save the community from Yellow Fever, which earned him a pardon, although that took time as well. The leaders of the fort sent a messenger to Washington with a request to pardon Dr.Mudd but the messenger was killed along the way in the civil war. That caused a year delay in Dr. Mudd’s pardon. A telling quote from Dr. Mudd said, “Imagine one loaded down with heavy chains, locked up in a wet, damp room 12 hours out of every 24 on working days, and all day on Sundays and holidays.”      The Army abandoned the fort in 1874.

In 1908, the area became a wildlife refuge to protect the sooty tern rookery from egg collectors.  It was proclaimed as Fort Jefferson National Monument in 1935 and designated in 1992 as Dry Tortugas National Park to protect its scenic, cultural, marine and scientific treasures.  Endangered green sea turtles and threatened loggerhead turtles nest here.

Thursday evening, we enjoyed stone crab claws, and caught up on some much-needed sleep anchored in Tortuga Bay.

We left Dry Tortugas around 9 AM and began our sail southwest to round the western tip of Cuba.  Story continues on our next post, Sailing Dry Tortugas through Cuba to Grand Cayman.

Click any photo to enlarge and see slide show.