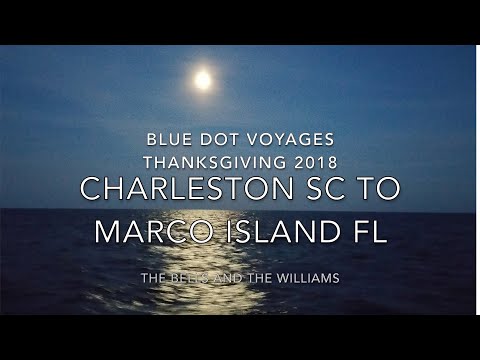 Following Seas are a treat.  And on this voyage from Charleston SC to Marco Island FL,  following seas were the norm.  Our departure was originally scheduled for the day after Thanksgiving. But as the winds often have their way, we had to push our departure UP 2 days, in order to catch the best winds and beat the coming storm down to Florida.  Total Trip:  Nov 21 – Dec 4, 2018

So, we left Wednesday about 3 PM, and sailed all night and all Thursday, finally reaching our Port Canaveral destination about 11 PM. BTW, Thanksgiving dinner was a Turkey Pot Pie I had prepared before we left. We originally were going to anchor inside the channel, however our late arrival meant we would have had to enter the channel in the dark, not something that is recommended if you are tired and in unfamiliar waters. So, we anchored right outside the channel, and quickly fell asleep.

When all of a sudden, there arose such a clatter, we sprang from our beds to see what was the matter. The 35 knot winds we had been promised, had arrived, and we were afraid our anchor would not hold. So, at 3 am, in the gale and driving rain, we had to pull the anchor and enter the channel to proceed to a protected area. Dawn had the task of pulling the anchor with salt spray coming over the bow and the driving rain in her face. We found what we thought was a fuel dock, put out our fenders, tied our lines up snug and waited out the storm.

When we awoke, the sun was shining, and Friday was a very different day. Turns out, we had anchored at a dock for a boat rental company. So, we fueled up, filled our water tanks, and set sail south again for a short run to Fort Pierce just to get a bit further south before more high winds might keep us in port. We anticipated having beam reach all the way down however ended up more of a close reach, so we had to motor sail most of the time.

But, what a bounty in fish ! Two Tuna & one Spanish Mackerel!

About 2 hours away from our anchorage the port engine dashboard suddenly went dark. Stephen checked the engine and it seemed to be still running fine. So, we continued on our way, entered the Fort Pierce channel -again in the dark, and anchored in a great spot by the Harbortown Marina. Dinner and sleep were all that were on our minds.

The next morning, Stephen checked the engine again and was not happy to find that the belt had frayed, AND the engine seal was leaking. He quickly got on the phone and found an engine repair company - Florida Marine Diesel; however, it was Saturday. So, they made arrangements to order parts that they thought we would need and said to call them Monday when we could arrange an actual dock so they could work on it.

Which was the next problem, we had made no docking arrangements. There was extremely limited availability. But the good people at Harbortown, after making several calls on our behalf, said that we could likely have a dock on Monday morning, IF a boat that was making its way down the coast from the Northeast leaves as he usually does every year.

So, we had to hang out on anchor Saturday, Sunday. Our 2-day early departure had just turned into a 2-day delay for engine repairs. While we waited, we washed the boat, discovered diesel leaking from our tank, relaxed, enjoyed their restaurant, did laundry, picked up groceries, went for a walk at the Fort Pierce Inlet State park beach, went fishing, played Yahtzee, and card games. Still a great time.

1.  Nude Beach - Blind Creek Beach is located at 5460 S. Ocean Drive, and although casual-nude use has a long history there, it wasn't until June 2014 that it was recognized as lawful by local law enforcement.

2.  Edwin Binney, who lived in Fort Pierce, was the inventor of Crayola crayons. Binney and his cousin, C. Harold Smith, produced the first box of Crayolas in 1905.

Funny story – Earlier that day, we had been joking about getting caught with insufficient paperwork on our dinghy, as we were still waiting for the SC license to arrive that we had applied for 2 months ago. Jaike had dropped us off at the beach walk and was reading a book while he sat in the dingy at a nearby dock, when a USCG officer appeared and asked him about his dinghy and fishing license, of which Jaike had none. The irony in us talking about this happening and then it is happening just 2 hours later was amazing. So, Jaike called Stephen who explained that he had the application on our catamaran. He then told Jaike to take us back to the boat and not to leave it again without the right paperwork, which actually Stephen had in his wallet the whole time.

We finally left the dock at 3 PM Tuesday and sailed all night – turned the corner at the end of Florida and headed west along the Keys. We stayed close to shore along the way to stay as clear as we could of the Gulf Stream. With 20-25 knot NE winds the Gulf Stream held high waves with short intervals. We had following seas and that was good because they were 8-10 foot seas with the tops breaking on most waves. We were surfing down the waves and seeing 14 knots at times for SOG (speed over ground). Those winds and waves made for a great sail and we made 236 miles in 36 hours, pulling into Key West to anchor on Thursday AM.

Jaike and Shawn decided to return home Thursday morning from Key West instead of continuing to Marco Island with us. So, we spent Thursday in Key West, anchored that night, and left at 5 AM Friday for Marco Island.

The sail to Marco was pleasant with a close reach and relatively calm waters. We were in the Florida bay which was a totally different experience then the deep waters on the east coast with the Gulf Stream. The Florida bay was only 50 feet deep all the way with crab traps everywhere. Luckily none caught under the boat, but we hooked one on a fishing line we were pulling, and it pretty much spooled a 50 before Stephen cut the line. Since we re were in the lee of the bay the seas were a comfortable 2-3 feet.

We pulled into Marco Island and anchored by Rose Marina. We then met up with my brother, sister-in-law and mother for dinner. The next day we took the family on a sail down to our final resting spot in Calusa Marina in Goodland FL. After spending more time with family, and doing a bit of maintenance, we returned home Tuesday to work and left our boat at that dock for a month.

Special thanks to St. Petersburg North Sails who repaired the suncover on our genoa in 2 days!

Click on any photo to enlarge and see a slideshow.